You might notice the site looks a little different – I decided I really didn’t like the small pictures that the current WordPress themes stick to, and didn’t want to pay for an upgrade just to make them wider 😉

So I went with an older them (Twenty Ten) that allows quite wider pictures in the posts (650 pixels across seems to be the sweet spot) so we’re gonna run with that for a while.

In the meantime, I picked up some free chip board yesterday, borrowed a circular saw and cut up a bunch of 3×6 boards into 2×2 and 1×2 boards: 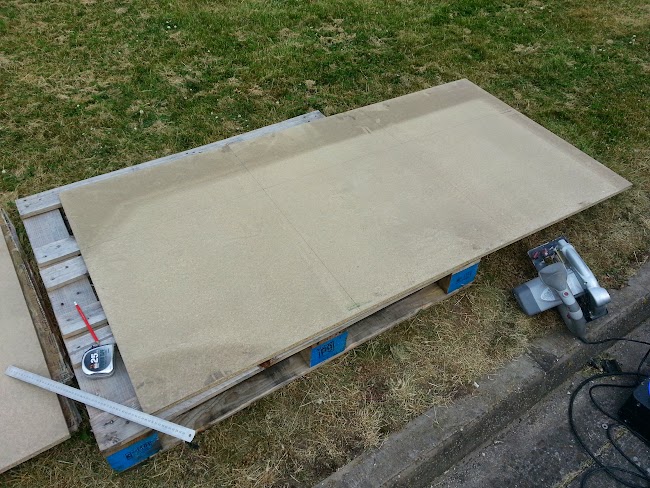 I ended up with this: 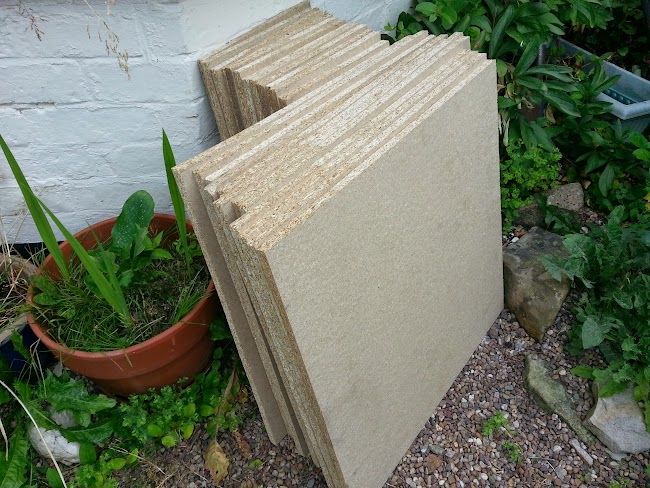 That’s enough 2×2 boards for 2 4×6 tables, plus the 12 1×2 boards can be made into 6 more 2×2 boards with some bolts and glue. Yeah, not ideal but I’ve got some ideas for the type of terrain that would cover up the joins and maybe even strengthen the boards somehow.

So, what are the plans?

The first thing is to make 6 boards that are similar to the Citadel Realm of Battle gameboard. In case you’re unfamiliar with them, they are a set of 6 plastic boards, each 2×2′, with 2 completely flat boards and four boards that build up to a hill in one corner. The boards can be arranged so there’s high ground in each corner, a hill in the middle of the board or opposing hills on either side or either end of the board. They’re pretty useful and make the game more interesting than having it on a flat surface, plus they still allow the placement of buildings, extra hills or whatever.

I’ve seen people make similar boards in blog and forum posts online, and while there can be a lot of effort that goes into making a set of boards, it’s a lot cheaper than the £175/$290! So I’m going to use pink foam to make corner hills on 4 of the boards, leave 2 of them ‘flat’, and paint on a texture.

Like the Citadel boards, the hill pieces will alternate when they’re stored away so they stack, and the flat pieces will just…stay flat!

I’m going to also make a road/city board, which will be pretty much all flat, but with built-up curbs and things like that. I’ve made a drawing with a first draft of a ‘city plan’: 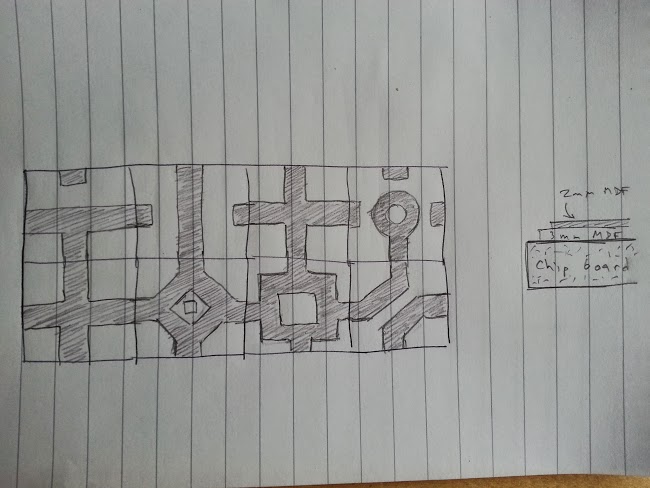 So you can see the boards can be rearranged for all sorts of layouts.

The street level will be the chip board itself, painted black and drybrushed with a medium gray. I’ll carve in some cracks and paint on street markings to make them look used and warn. The curbs/pavements will be 3mm MDF, and the building ‘plinth’ (for lack of a better term, because that’s what Forgeworld calls them) will be a 2mm or 3mm sheet of MDF on top of the curb layer. That should strenghten them up quite a bit, all that wood glue, so I might use the 1×2′ pieces for the city boards. The idea with these is to leave them flat so they stack nicely and don’t take up too much space in the house.

With these being flat, I thinking about making the reverse side a spaceship decking board, with different types of grates/decking/whatever painted on or even printed in color and glued on, for Zone Mortalis type games or just a different look (plus it gives a home for my Tyranids, who are all going to be based on space ship decking bases)

That leaves 6 more boards that I might make into a trench board (LOTS of pink foam!), or make a couple of extension pieces for each of the boards I’ve got planned.