I wanted to try painting on the felt that I use for 40K and X-Wing Miniatures, so I gave that a go the other night. I’ve always been entranced with nebula pictures from the Hubble telescope (gas clouds) and wanted to paint something similar on the reverse side of the black glitter felt. Unfortunately I made the rookie mistake of not having a picture on hand, and so far I have this: 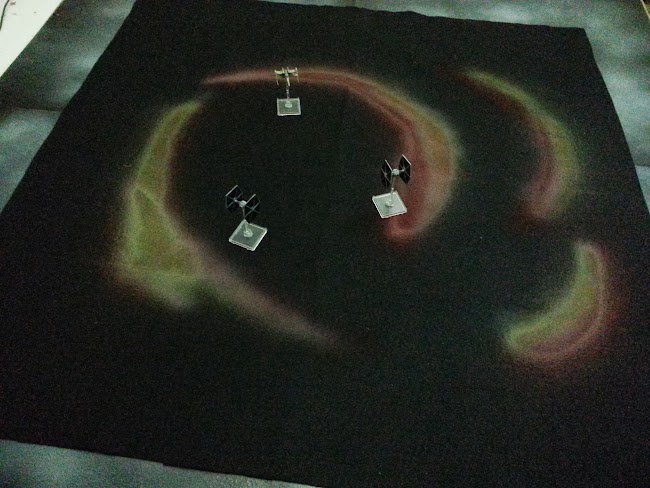 It’s not utterly horrible, just pretty much ‘bad’, but it’s salvageable – it’s just layers of paint after all. With some ships on it, it looks a lot better than it did just hanging up after painting!

While recovering from that, I decided to try painting the desert terrain felt that I got a while back. This is a 4×6 foot piece of tan felt that works well as a game surface but it’s a bit flat and boring, being all one color. I’ve never been taken with the typical wargame board of abrupt changes between grass and dirt or other colors, but my first attempts at putting darker areas of brown on it had exactly that almost sharp edges of color and it was starting to look like the side of someone’s van with a bad desert camo paint job! So I added some lighter areas of brown to make the dark splodges fit in a bit better and that seemed to work. Then I mixed some yellow and blue (because I don’t have any green yet) and put in some very small bits of desert foliage. I’ve spent a bit of time in the California deserts and it’s not all just sand and rock!

So this is what one side of the desert felt looks like now, with some terrain and figures on it: 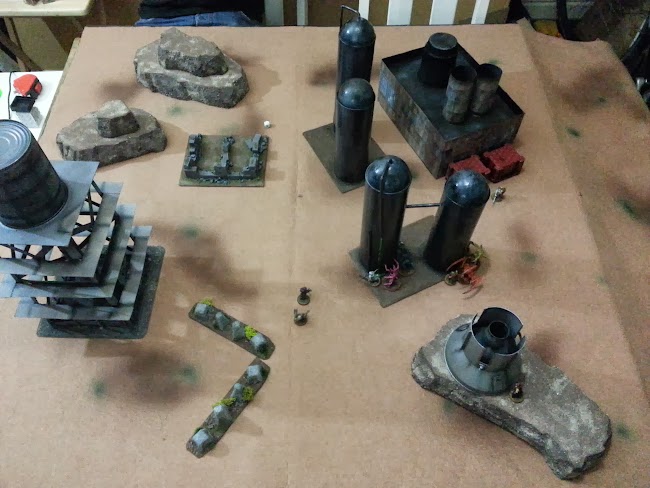 I’ll probably add in more light brown around the dark bits, and maybe some light grey washes in longish streaks (like ancient rivers) for a little more variation, and see how that looks.